Julius Kolawole of the African Alliance of Rhode Island received the prestigious “Leadership in Advocacy” award at a Washington, D.C. ceremony last night

February 22, 2018 (Smithfield) – Lauded as an icon in this state’s African immigrant community, Julius Kolawole, cofounder and President of the African Alliance of Rhode Island (AARI), this week accepted the prestigious “Leadership in Advocacy” award, presented by the Association for Community Affiliated Plans (ACAP).  Kolawole was nominated for the award by his colleagues at Neighborhood Health Plan of Rhode Island (Neighborhood).  The two entities collaborate extensively in their efforts to encourage preventive health care for the state’s most at-risk populations. 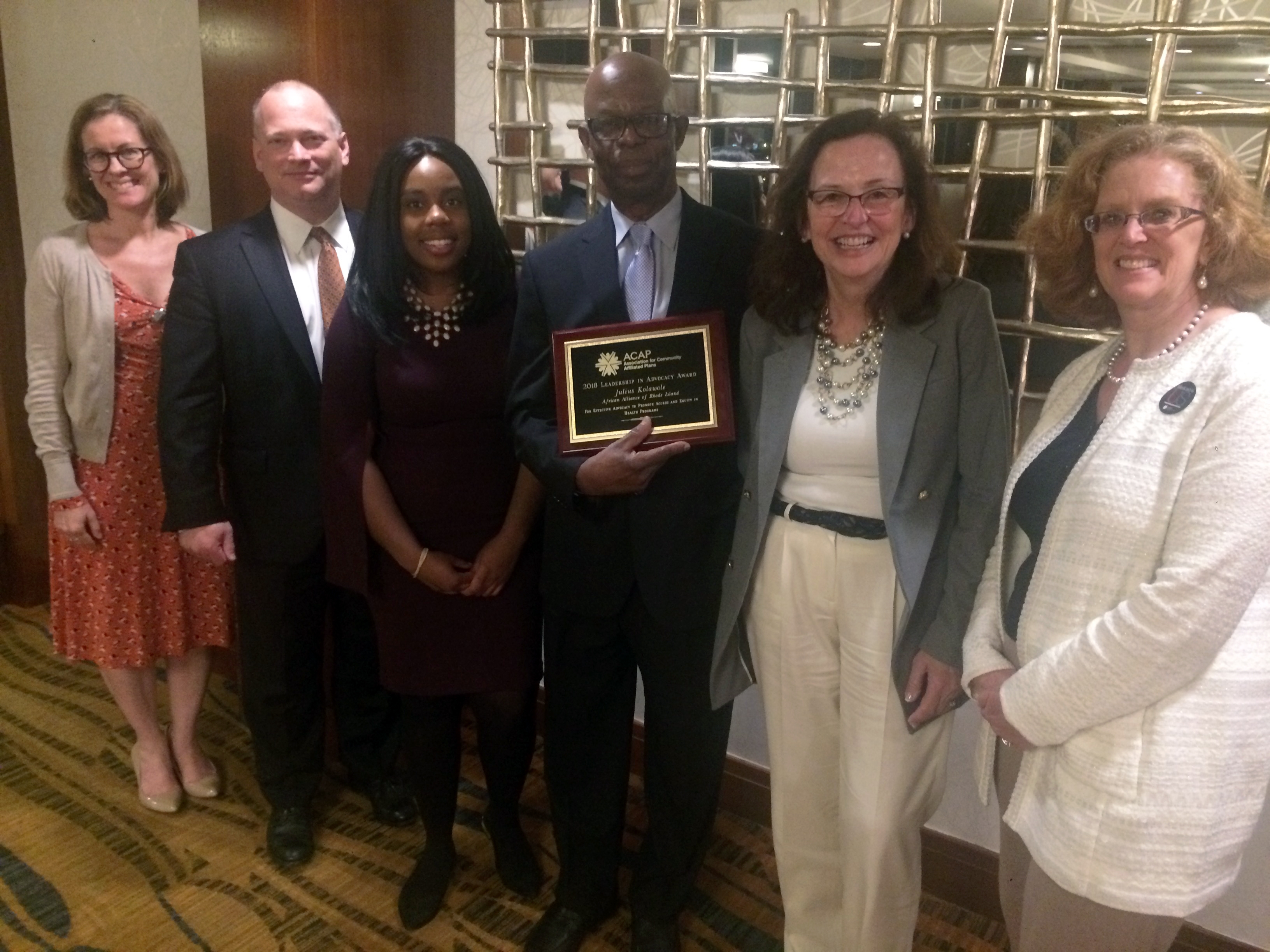 “Julius understands the barriers refugees face when coming to America, and he promotes an environment of unity and education to help people be healthy,” said Peter Marino, Neighborhood’s President and CEO.  “Julius’ leadership in supporting Neighborhood’s preventive care efforts is just part of the reason we were so happy to nominate him for this award.”

“ACAP is excited to recognize Mr. Kolawole for his dedication to improving the accessibility of health and wellbeing for a population close to his heart,” said ACAP CEO Margaret A. Murray. “He is an outstanding example of the change that is possible when you work closely with the community. Understanding your community is crucial to tailoring your initiatives so that your solutions stick.”

At the helm of the AARI, Julius has implemented sustainable programs that confront the circumstances preventing African refugees from obtaining the health and well-being they and their families came here to seek.  He has spearheaded the creation of five community gardens (with a sixth on the way) in cities around Rhode Island.  In addition to providing food security, these gardens provide vital economic and social opportunities; Julius has organized culinary demonstrations so that refugees can sell traditional African dishes, and farmers can sell their vegetables at local markets. 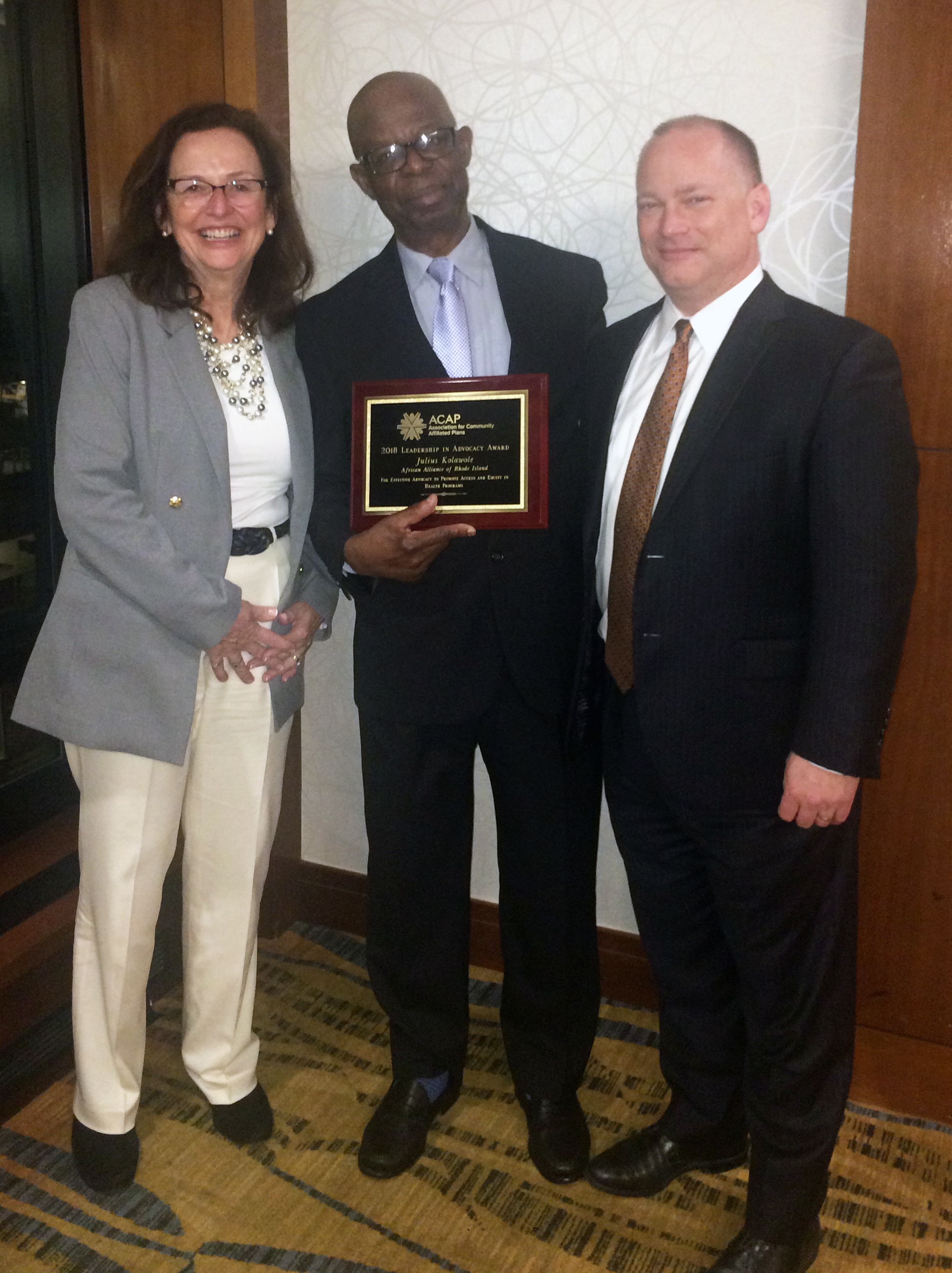 At the same time, AARI’s annual African Health Summits connect members of vulnerable African communities with advocates, health care providers, and community leaders who help them address their medical needs. These events also provide the perfect opportunity for newly-arrived immigrants to learn about the importance of preventive health care and how to access it.

“Julius’ advocacy on behalf of Rhode Island’s immigrant and refugee communities is unparalleled,” Marino added. “His work makes it possible for immigrants to thrive in their adopted homelands socially, financially, and medically.”

In addition to the award, ACAP will make a $1000 donation to the African Alliance of Rhode Island. Neighborhood today announced that it will match that contribution.

“Thanks to the generosity of ACAP and Neighborhood, I’m proud to say that AARI’s 2018 African Health Summit is now fully-funded,” said Kolawole.  “That’s a tremendous financial burden lifted from our backs and it frees up our team to dedicate more resources towards connecting people with the health care they need and deserve.  Partnerships like these are simply vital to helping us do our work, and everyone at the African Alliance is so grateful for them.”