Rigoberto beams as he displays his painting: it’s sunset on a tropical island.  Not bad for a beginner; remarkable for someone recovering from a stroke.

“When I had the stroke [in 2015], I was sleeping and I remember waking up one morning and I couldn’t move my right leg. The right side of my face felt very numb,” Rigoberto recalls.  “The right side of my whole body just fell like it was dead and that’s when I knew something wrong was happening.”

In an instant, everything changed. Rigoberto couldn’t go to work at his auto body repair shop anymore – in fact, he couldn’t even swallow his food. For a once independent man, it was terrifying. 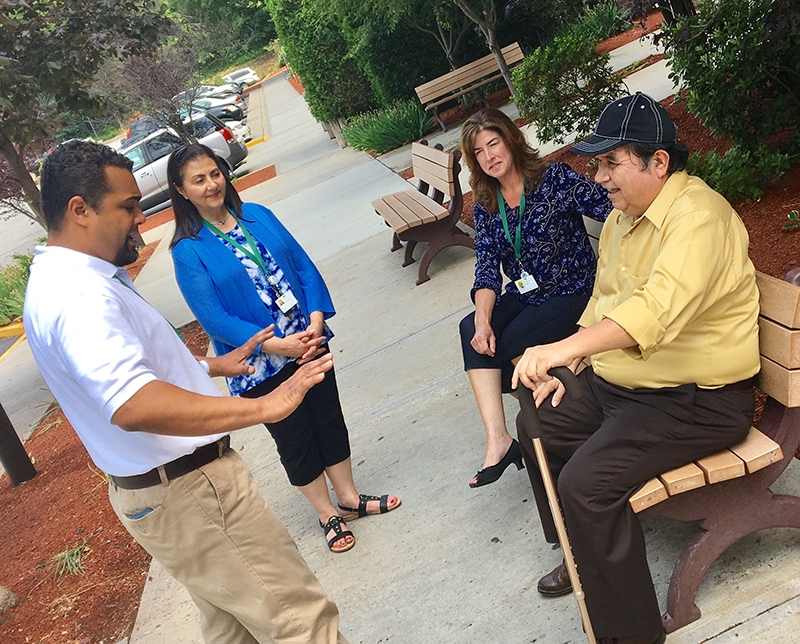 “My whole life changed,” the Providence resident explains.  “I could no longer drive and I could go longer do anything for myself. And I needed help from others. I was crying you have no idea how much I was crying.”

Rigoberto had tremendous medical and behavioral health needs. A later diagnosis of cancer of the kidney only made things worse. His anxiety grew.

“For him, it was just the difficulty of asking for help and having no one around him to help him,” says Noel, a Community Care Coordinator with Neighborhood Health Plan of Rhode Island.

“He was having to pay people to take him to medical appointments, and he was missing a lot of appointments because of that,” explains Terri, a Nurse Case Manager with Neighborhood.  “He didn’t have the money sometimes to pay people.”

Enter: Neighborhood’s Integrated Care Management Team. They connected Rigoberto with transportation to and from his appointments and started him on physical and speech therapy.  They also found a therapist willing to do in-home counseling, and who spoke Spanish, which was a need Rigoberto had not anticipated.

“[Rigoberto] was bilingual,” Terri says.  “After his stroke, he still understands English but he can’t speak English. He can only speak Spanish.”

Luckily for Rigoberto and thousands of other bilingual Neighborhood members, our care teams speak many languages.  It’s taken a lot of effort, but Rigoberto is slowly regaining his mobility, using a walker or a cane to get around

“His mood is bright, he has become more social, he takes painting lessons, he goes out socially,” says Terri.

Claudine, another Nurse Case Manager on Rigoberto’s team, sums it up: “When you see success stories, you know it can happen and it’s possible, so you just keep working towards it. It’s such a good feeling to see him in a better place, safe, and just enjoying his life and living it.”