Visit Andrew’s Warwick home and you will find him surrounded by technology. Much of it is educational; some is for entertainment.

But the bulk of the electronics surrounding the nine-year-old boy has a much more important purpose: keeping him alive.

Andrew has needed an intense level of care since the day he was born, and he always will.

“He can’t move on his own,” Tara adds. “He will never roll over, he’ll never brush his teeth, that sort of stuff.”

Andrew is largely confined to his bed or to a specialized chair that can support him and position him in way that helps him interact with the world. He relies on a feeding tube and he breathes with the help of a ventilator.

“He has heated tubing, so there are wires in these [tubes] to keep his breathing humidified,” says Tara.

Many of Andrew’s medical supplies are custom-designed for him. All of them are vital. If any supplies are delayed, or if the wrong materials are delivered to Andrew’s house, he could be in jeopardy. That’s where Neighborhood Health Plan of Rhode Island comes in.

Andrew has been a Neighborhood member since birth. He and his family have worked with a care management every step of the way.

“I want to make sure that Andrew is getting what he needs and things are moving smoothly for him,” explains Alberta, a Neighborhood Nurse Case Manager currently working with Andrew. 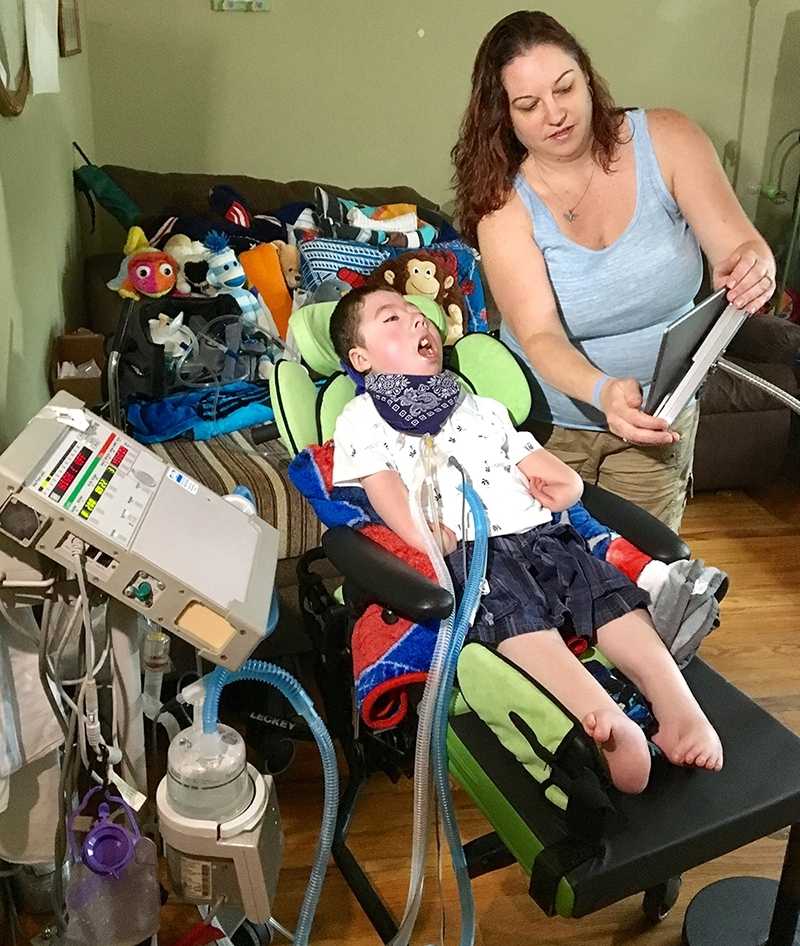 Alberta is part of Neighborhood’s Maternal/Child team, meaning she helps many families whose kids have intense needs. She calls all of them her “kiddos”.

“These kiddos, they depend on us on an ongoing basis,” Alberta says. “And that’s part of the job. That’s the reward of it for me.”

“Neighborhood, and specifically Alberta, has been key and helping us to get these supplies in that timely manner, and keep getting them on a consistent basis,” Tara says. “Because the [durable medical equipment] company, they don’t know Andrew; to them he’s just a number. But, again, this is our life. This is my first born, my number one son. So, obviously we want him to have everything he needs to keep him well, and alive, and thriving, and continuing to make progress.”

“I make sure that it something I stay on top of,” adds Nurse Case Manager Alberta. “I have a pop-up [on my computer] that comes up at the beginning of the month because I know when the supply is due to arrive, so that gives me a reminder to call the supplier.”

Caring for Andrew is daunting, but his mom is a tremendous advocate. And she is quick to say that Neighborhood plays a big role “easing a little bit of that burden of being a parent of a child with special needs, especially medically-fragile like Andrew.”

That support allows Tara to hold down her job – and to serve on Neighborhood’s Board of Directors’ Planning Committee, where she can give company leaders firsthand information about what it’s like to be a Neighborhood member.

Tara says in her experience, other health plans simply don’t demonstrate the commitment to and level of care for their members the way Neighborhood does.  Neighborhood “really does care about the people they are providing services for,” she says.

That’s something that impresses many Neighborhood members, but for the people doing the work it’s second nature.

“I get such reward knowing, ‘OK, she doesn’t have to worry about this piece I’ve got it,’” Alberta says.  “[Tara] has a child that she’s taking care of 24/7, so it’s alleviating that in any way possible . . . so she doesn’t have to continuously do the hard work, [that’s] why I’m here to be a support.”